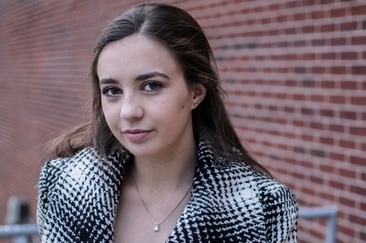 At nine years of age, Thatcher Johnson-Welden began acting in local theatre productions. Within a few years, she added film acting and voiceover work to her repertoire. All of these experiences led to a fascination with the off-stage and behind-the-camera aspects of the entertainment industry. In 2014, Thatcher founded Fernweh Productions in order to create, educate, and explore global diversity through the arts. As a result, she is able to create projects that she is passionate about and work with others who share her passion and creativity. In 2016, Thatcher graduated from the UNCSA High School Drama Conservatory. Currently, she is a rising second-year undergraduate student at the UNCSA School of Filmmaking who plans to focus on the producing aspect of filmmaking. She is the Vice-Chair of the School of Filmmaking Student Association, a member of SGA, a Student Mentor in the School of Filmmaking, and a UNCSA Student Ambassador. She also works as a film inspector and projectionist. In the summers, Thatcher is an instructor at the UNCSA Drama Summer Intensive and the Acting Out Summer Camp. When she is not working, studying or volunteering, Thatcher loves to travel the world…with a camera in hand!